Cathedral of Our Lady Assumed into Heaven and St Nicholas. 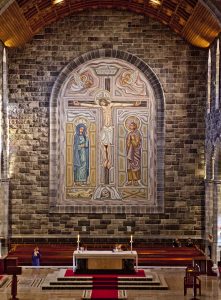 The Cathedral of Our Lady Assumed into Heaven and St Nicholas is the most prominent building in Galway. Completed and opened in 1965 it replaced the earlier cathedral on Middle Street which dated from 1810. The diocese of Galway is the most recent diocese established in Ireland. Originally the city was part of the ancient diocese of Annaghdown and later Tuam. In 1485 Pope Innocent VIII established the wardenship of Galway which gave the city and a handfull of parishes surrounding it a level of independence from the Archbishop of Tuam. It had a senior priest or warden who used St Nicholas’ as his seat. The Reformation made it difficult for the Church to function in the open and city churches were tolerated but not open. As toleration of Catholics grew public worship was more common. By the 20th Century it was clear the Middle St location was not adequate so a new Cathedral, after much fundraising, was built.

The cathedral is located on the site of a former gaol. It is in cruciform shape and is topped by a dome. The interior is laid out in the form of a basilica while the limestone walls are in Romanesque style. It is the cathedral, mother church, of the diocese and has been described as the last great stone cathedral built in Europe.  Apart from being the most prominent building in the city it is the centre of Catholic life in the Diocese of Galway. As a cathedral it is the bishop’s church where he presides and teaches. The Cathedral of Our Lady Assumed into Heaven and St Nicholas is also the location for many choral and organ recitals throughout the year. 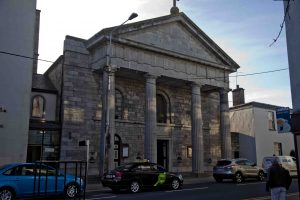 The “Abbey”  as it’s affectionately known is on Francis’ Street and is the  Franciscan church in Galway and a parish serving the city centre.

Ther first Franciscan foundation in Galway sates from 1296 only 70 years after the death of St Francis. It was originally on the site of the present courthouse, very close to the present day church. During the suppression of religious houses the church was destroyed and the friars scattered. this happened in 1567. The friars continued to offer Mass and

The church is described as a fine example of neo-classical architecture. The columns of the portico  as you enter are the first thing that strikes the worshiper. The interior is richly decorated with carvings, most notably angel masks. The plasterwork on the dome is also notable. This is one of the most popular churches in Galway and is never empty. It has only very recently undergone some renovations as can be seen in the new tiled floor. “The Abbey” as it’s known in Galway remains a very popular church. 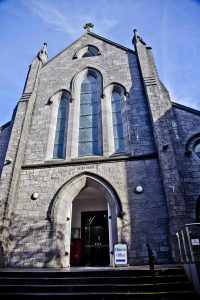 The Augustinians were the last of the Medieval orders to arrive in Galway. The Augustinians were founded in 1243 and were present in Ireland shortly after that date. However they didn’t arrive in Galway until 1500. Back then the city was much smaller than it is today and their location on what is the Forthill cemetery was outside the city walls. A plaque on that site commemorates the dedication of the original church to St Augustine in 1500. Not long after their arrival the first persecutions started and in 1546 the house was suppressed. This was not the end of the friars in Galway though. They remained to serve the vast majority of the population who remained faithful to the mass and sacraments. It wasn’t until 1760 that they were able to establish a public place of worship again and in 1859 the present church on Middle Street opened its doors.

while the inside of the church has beed described as ‘plain’ in the National Inventory of Architectural Heritage there are some notable elements. The high altar and reredos are particularly notable. This was added in the mid 1930s. It includes an image of St Augustine and on the opposite side his mother, St Monica. There are two shrines on either side of the altar, to Our Lady of Good Counsel on the right and the Sacred Heart on the left. The church remains the heart of a popular city parish today. 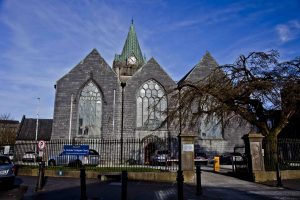 St Nicholas’s Collegiate Church is the oldest building in Galway still in use. It was built in 1320 on what is today Lombard Street and dedicated to St Nicholas. St Nicholas is the patron saint of seafarers so this recognised the importance of sea trade to Galway. In 1485, when Galway received a charter granting it city status, Pope Innocent VIII granted it collegiate status. This means it was placed under the authority of a priest who would be a warden and several other priests who would be the college. They would gather regularly and sing the Divine Office. During the Reformation the building changed hands several times until British domination was solidified after the Treaty of Limerick in 1691.

The church is built in Irish Gothic style and is in a cruciform shape. It is exquisitely decorated in medieval carvings. Included inside are several gravestones marking the final  resting place of several prominent Medieval Galwegians.

Today St Nicholas’ is under the custody of the Church of Ireland and is a parish of the Diocese of Tuam, Achonry and Killala. 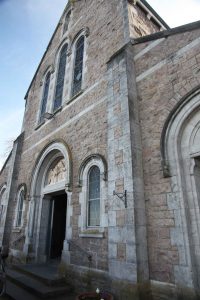 The Dominicans arrived in Galway in 1488 and thus had to find a location outside the walls in order to settle their community. They took possession of an abandoned chapel of St Mary’s. While the foundation thrived persecution led to the friars having to be more discrete and reduce their activities. The upheaval of the mid 17th century did not fare well for the Dominicans in Galway. Being outside the walls they were not protected during the wars of the period and suffered destruction several times. We know a new church was built and the community returned by the 1670s. The church was rebuilt several times until the present building in the Claddagh was opened in 1891.

The church was built in Norman style using local limestone. The interior of the church is notable for its mosaics in Celtic-Revival style as well as the ornamental reredos and altar. St Mary’s is the parish church for the Cladagh side of the city. Today the church is also a parish in the diocese of Galway. 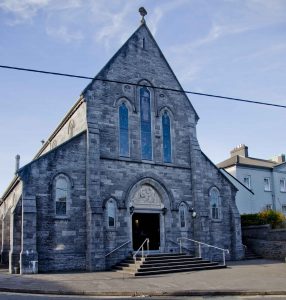 The present St Joseph’s church on Presentation Road dates from the 1880s when Galway was much smaller than today and the parish covered most of the city west of the Corrib. Originally the convent chapel of the Presentation sisters functioned as the parish church but that proved to be far too small. With the appointment of a new parish priest in 1881 it became obvious that a new church was necessary to accommodate the growing population. It was a time when Galway was smaller and much poorer than it is today but Fr Lally, the new parish priest managed to collect enough money to employ the well known architect William Hague to build a brand new church. Work on the church started in 1882 and it was consecrated in 1886. Work on the church continued throughout the late 1880s.

The building itself is built using direct labour and in local limestone in Gothic style with interior stone pillars imported Aberdeen. The altar is of note and is Irish & Sicilian marbles in the French Gothic Style. The interior of the church was renovated extensively between 2008 and 2009. It remains a vibrant parish church today.

The Poor Clare’s, much beloved by the people of Galway today, first arrived in the city in 1631. They were granted a piece of land on what would subsequently become known as “Nun’s Island.” The community grew rapidly. Misfortune was to befall them though in 1652 when the city fell to Cromwellian forces. In 1653 all female religious in the country were ordered to marry or leave the country so the nuns had to leave their beloved convent. Because many of the nuns were local the first found refuge with family and later managed to acquire a house in Market Street in the city. here they remained until 1825 when they returned to Nun’s Island.

The rule of the order does not permit the public to enter the cloister but part of the convent chapel is open to the public. The chapel was built with much of the convent in the 180s as an addition to an older building from the 1700s. The stained glass of the chapel windows are of particular note depicting ….. The chapel is serviced by priests from the nearby Franciscan community and it retains a small but devoted following of local lay people who attend Mass and devotions. For the last few years it has been the site of Benediction at the end of the Corpus Christi procession.

In recent years the sisters, despite being enclosed, have carried out a very vibrant outreach online and using traditional as well as social media and print.